Here's an update to brighten up certain community member's Labor Day weekend - Damian has released another video on some of what is going on behind the scenes, mainly talking about progress on the levels.

I also wanted to leave just a bit of information resulting from our previous update - I am working on Planet X, one of the maps found from the first game. I have essentially 'built the foundation' for the level, and will be returning to working on Streets to finish that off. I have a few more assets to crank out for it and a few fixes to make, but things are starting to come together really well and I hope to share how the entire level looks soon. Hopefully, I may be able to share how it plays not too long after that!

I believe Damian covered everything else for the week, we'll probably chat again next weekend.

We have been quiet over the past couple weeks. Our bad. Some of us have taken vacation (I myself plan to travel to Seattle to attend PAX Prime this weekend, and sorry, but we are not previewing the game yet, but I hope we can exhibit the game in an event when possible.) Others have been quietly putting time into other assets needed to bolster content on the project. For instance, I have been putting a lot of time into Streets over the past couple months, but about three weeks ago, I formulated a solid strategy on recreating one level in particular. Today, I will show you some of the work; however, this is perhaps the only time anyone out there will be able to view this work, as these are collision bounds that will not be seen from in-game. 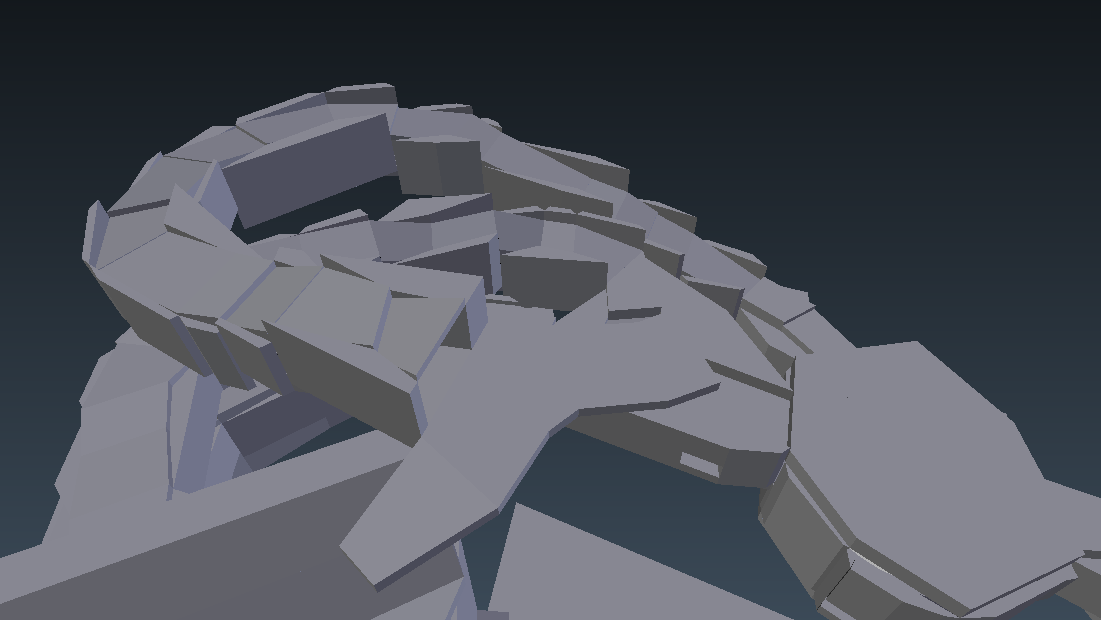 Now you may ask that this looks very blocky, and you would be correct. However, I decided to "work from the foundation" and create these bounds as close to the original geometry as possible. And so I have finished all bounds on the unique geometry, and are now planning the next course of action - beautifying the unique geometry. This will involve serious modification to said geometry, and also create new geometry and bounds to reflect something in nature to this map, the successor to it as a campaign level in the next game, and other pieces of work I or the original designer for the map has been inspired by. Well, I may have given away which map this is just from that last sentence, but I would like to see if anyone could shout it out in the comments.

I was informed by Damian that he will be releasing a video soon on the progress he has made on his levels, so I will be posting those when they are ready.

Also, we have had quite a few people apply to the team recently. Thank you, and we hope to find even more people to get this game out the door sooner!

As a final word: 18 years ago, GoldenEye 64 was released to the masses and had kicked off the idea for a certain five individuals from Rare start their own game studio. From this came Free Radical Design, the guys mainly known for the TimeSplitters series. Back to Rare, though - congratulations on creating such a well-known and respected game, for telling the world that there is a console market for the shooter genre!

Good afternoon / evening everyone, I am compelled to share a couple things with the community today.

First off, we do not have any new media to share today. But before you start putting Fingers on triggers (and subsequently pointing guns at my head,) I want to assure you that we are not working any less diligently. In fact, Alfred is close to showing off not just a character, but a weapon he redesigned himself. I have to say that both are particularly impressive in separate ways. Hopefully it will not be too long before we can show those off.

Momotaro has also been making a lot of progress on Aztec. Considering he is primarily a 2D Artist, he is pretty damn talented in creating environments, and I am certainly hoping to share some screenshots soon. Alliteration(s) aside, I think the community will be in for a treat once further progress is made on the particle effects.

As for Streets, I am continuing to create more props to liven things up. Currently, I am working on the buildings on one end of the map known as Red base. I should keep it at that for now, but hey, be ready to grab some popcorn once I am ready to share more.

Also, Damian wanted to impart the community with this image. Interpret it as you will:

Last but not least, I will be heading to PAX Prime in Seattle, Washington. I should be there all four days - from the 28th to the 31st of this month. I am looking forward to previewing games to be released this and next year - one game in particular is Homefront: The Revolution, built by the lovely people at DS Dambusters, formerly known as Crytek UK, formerly known as Free Radical Design.

Homefront: The Revolution "Thank You" Trailer

Anyway, if anyone in the community happens to be at the convention as well... it will probably be tough to spot me, considering how I will not be involved in any panel or exhibit, let alone have I given any personal information out. Well, if you overhear someone talking about TimeSplitters, do ask the person if they are Ibanez; if it is me, I would properly introduce myself, otherwise I suppose you will be faced with an awkward conversation. Oh well, I would really look forward to meeting anyone out there, and hopefully the team will have a chance at actually exhibiting the game one day.